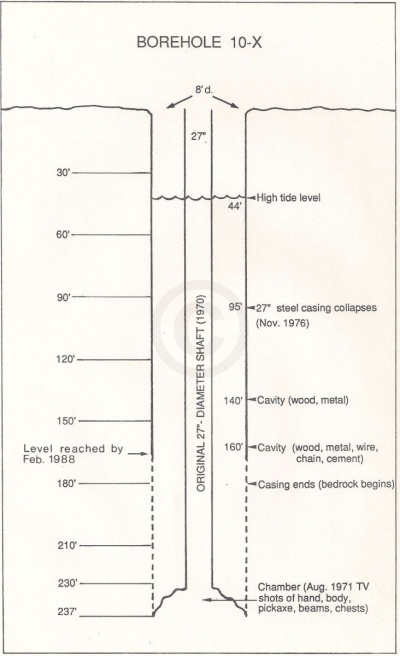 Borehole 10X was started in the summer of 1970 and is approximately 55 meters (180 feet) northeast of the Money Pit.  Triton Alliance hired the Bowmaster Drilling Company, who employed a 15 cm (6 inch) rotary drill to bore down to a total depth of 70 metres (230 feet).  Bedrock was encountered at 55 metres (180 feet), and at 70 metres (230 feet) and a cavity was found. While this cavity has become famous for the contents thought to be contained within, it was not the only cavity found while drilling Borehole 10X though.  Two more cavities were passed through, above bedrock, on the way.  They were encountered at depths of 43 metres (140 feet), and 49 metres  (160 feet).  When Triton Alliance widened the borehole to allow people access to the depths, Borehole 10X officially became the 29th Shaft on Oak Island. 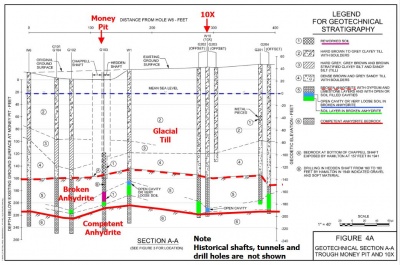 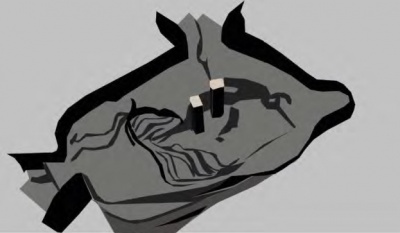 In order to put eyes on the objects seen by the camera, a team of divers led by Phil Irwin of Brooklyn Nova Scotia made the first of a handful of dives in 10x.

When diver's were unable to locate any of the objects Dan believed were seen in the videos, he decided he needed to see for himself, and donned his dive gear. He also made it to the chamber at 235ft, and experienced the strong water currents, but due to poor visibility also could not see anything. Dan did a second dive in 1972, and after finding nothing of significance on that dive didn't find it worthwhile to risk a third dive.

Since 1972, much more sophisticated camera equipment, sonar equipment and a highly qualified diver have reached the chamber at the bottom of 10x and have been unable to find any of these items, but Dan Blankenship swore to his death that they once existed. 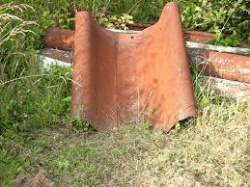 On November 26th, 1976, Dan Blankenship was lowered down into Borehole 10X to try and discover more about the mysterious treasure and the significance of the area known as 10x, when his curiosity nearly cost him his life. At a depth of 95 feet, the casing of the shaft began to collapse and Dan was almost crushed. Oak Island Treasure Co.UK hosts a transcription of their radio conversation. The picture to the left shows the collapsed section of the casing that would have entombed Dan in the 10x shaft. Following this mishap, it was clear to Dan that in order to do more exploration in 10x they would have to reinforce it with much bigger and stronger casings. 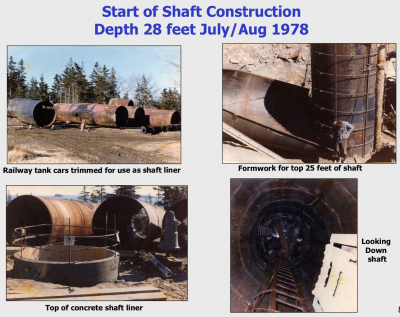 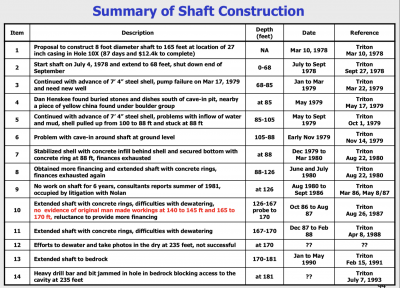 in 1978, Dan aquired three old railway tanker cars, (34ft long x 8ft round) and used these to form a much stronger casing for 10x enabling excavation of the shaft to a depth of 160ft with 8ft diameter. In order to get the tanker cars in the hole, he had to excavate 10x largely by hand to 160ft, sliding the cars in as the excavation reached new depths. Dan Henskee did a considerable amount of the work in the pit with Dan by his side much of the time. The railcars were able to reach of a depth of 126ft before Triton ceased operations leaving 10x over 100ft from the chamber. Dan appealed the directors of Triton to restore funding to the 10x project but was not successful. This difference in opinions is believed to have started the feud between Blankenship and Tobias that would eventually drive Tobias away from Oak Island and allow the Lagina team in.

One of the first areas the Lagina team explored was Borehole 10x. Although the show doesn't provide specific details about it, I believe that the Laginas felt they owed it to Dan to thoroughly explore 10X as the new partners coming in to the team. Even though The Laginas purchased their rights to the partnership from David Tobias and could have chosen any path for further exploration it is very clear that relationships, shared knowledge and courtesy is a top priority for the Laginas. At one point even when it seemed clear that there was nothing to find in 10X, because Dan was so adamant that there was something in there (lying out all his evidence on the table)- they did go back one more time.

Although there had been at least 4 dives conducted in the 1970s, there have been a few additional attempts to put eyes in the bottom of 10X recently. Prior to getting anyone safely to the bottom the team had to first remove all the debris that could cause a diver to get trapped in the bottom. This was done using an airlift system and putting people in a basket to remove obstructions. The final obstruction which could not be removed is a part of a drill bar that was dropped in years ago, and is wedged in the 27" shaft. This drill bar made an already narrow shaft even more difficult for divers to pass.

Although it was mentioned briefly in Season 3, Episode 4 of Curse of oak Island, There has not been much discussion about Martini's law with respect to deep diving. I think it is very relevant to talk about how Martini's law causes Nitrogen Narcosis with respect to divers in 10X. I don't have specific details about the equipment and/or decompression profile used by the Irwin company or Dan Blankenship- but it is my belief that neither of them were specifically trained in the use of technical gases for deep dives. If this is the case, then both Irwin and Blankenship were limited to a very minimal bottom time (Dive tables only allow 8 minutes at the depth of 130ft) without required decompression. Although we talk about the depth of the cavern being 235ft, the entire shaft leading to the cavern doesn't have to be entirely flooded. I would be willing to bet that the early dives in the 1970 were accomplished with water as low as possible making the actual water depth pretty close to the 130ft range.

In addition to the bottom-time limits imposed to prevent decompression sickness, divers using normal air (78% nitrogen/21% Oxygen) would be very likely to experience Nitrogen Narcosis at any depth exceeding 90ft (The depth limit for recreational divers is 130ft for this reason). So, while the Irwin divers may have been accustomed to diving at greater depths and may have trained themselves to be less susceptible to narcosis I highly doubt Dan Blankenship had the same level of experience. In modern technical diving the use of mixed gases (helium, nitrogen, and oxygen) can effectively illiminate the potential for narcosis, but I don't believe this would have been readily available in the 1970s- so it is very likely that Dan was experiencing Nitrogen Narcosis which could very easily explain the things he truly believed he was seeing.

The exploration in 10x is credited for helping discover what many still believe is the source of water to the money pit from the South Shore.

During a particularly harsh winter in 1979, Dan had a pump running in 10x to maintain the water level low in preparation for the next season of digging, when he noticed 4 areas just off the shore where the water was not frozen, when the rest of the cove was. He believed it was due to the warmer water coming up from the seabed from 10x that was preventing those areas from freezing. At a later date, the pump broke down, and those areas quickly froze over- indicating that there was a direct relationship between the South Shore and 10x, and possibly the entire money pit flood system. This theory was tested with colored dye a number of times in the years to come and essentially proved that there is some form of free communication between 10x, the money pit, Smith's cove and the South Shore. The same ice holes have been re-created multiple times over the years. There have been some underwater explorations of the South Shore, but nothing conclusive has been discovered to date.

Throughout this site, it is my desire to stay entirely neutral on opinions instead presenting facts that you (the reader) can interpret and come to your own conclusion, yet I try to balance this with my desire to consolidate all the known information (and opinions) in one location for each research. John Wonnacott of Blockhouse Investigations has an entire page devoted to his theory of what is or isn't located in Borehole 10X. I have included what I consider to be pertinent information here, and you can visit OakIsland Compendium if you want to read the entire article.