A sea captain born about 1748 resided in Fells Point, Baltimore, Baltimore County, Maryland. There is not any compelling evidence that Captain Anderson had any pirate treasure to hide on Oak Island, but he has a connection to the island like no other. He is believed to actually have lived on Oak Island!, selling the lot to Samuel Ball in 1788. The land records show that James Anderson owned lot #26, also Captain James Anderson the loyalist is confirmed to have been granted land in Chester, so it stands to reason that it could have been the same James Anderson to own land on Oak Island. The only record of his death was found on a document from the Masonic Lodge No 9, which states "died in 1796" in West Indies. This was a year after the money pit was discovered, so it stands to reason that he could have brought any treasure he had to the island prior to 1788 and hid it somewhere.

There certainly doesn't seem to be any evidence that he had the means or reason to build the money pit or any of the other structures, but that doesn't mean he didn't hide something on the island in an already established "vault", or simply a hole dug in the ground. Those that believe Samuel Ball had excessive wealth could attribute that to finding something hidden by Anderson.

Formerly owning lot 26, from whom Samuel Ball would eventually acquire the land in 1788, a document from Masonic Lodge No. 9 in Nova Scotia would seem to indicate that Anderson died in 1796, not long after the discovery of the Money Pit, while abroad in the West Indies.

“It appears Clearly that Anderson is both a Pirate & a spie.  He was acting in the Enemys Barges when they murder’d Burn’d & Plunder’d Particularly at Lower Marlbro the 8th Day of Apl last, He was also a Principal man, at the taking of several Vessels Loaded with Tobo in the mouth of Patuxtin December last besides what is mention’d in Your Excellency’s Letter to me on that Subject. He Has also traveled through the Country under two Names, & Different pretences & told various falsehoods & shew’d a Commission from the Enemy &c &c.”

[1]Although he sold his land to Samuel Ball in 1788, there’s no reason that James Anderson couldn’t have continued and resumed his illicit high-seas activities, enlisting others from the nefarious collection of ex-soldiers, privateers, and merchants on and around the island. What exactly was he doing in the West Indies at the time of his death for example? Did his death in 1796 spark some kind of hunt for his stores? Could this hunt have led to finding the profits from the smuggling and a division between four men? While 1795 is taken as the date of the Money Pit being found, this is by no means certain and close enough to Anderson’s death to be questioned. All this is speculation however and, as before, would not explain various personalities returning to the Money Pit over many years. 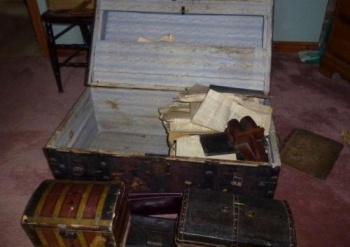 On Curse of Oak Island (season5, episode 2) the descendants of James Anderson show a chest belonging to Anderson that had been passed through the generations, and a ring containing four keys, only one of which opens the chest they have. Their theory is that there were three other chests hidden on the island to which those keys belong. The family of James Anderson is actively looking for additional details on his life and activities. You can find their research results on their website.