The entire article is copied from the BlockHouseBlogin the interest of preserving the content in the event that the original site goes down. 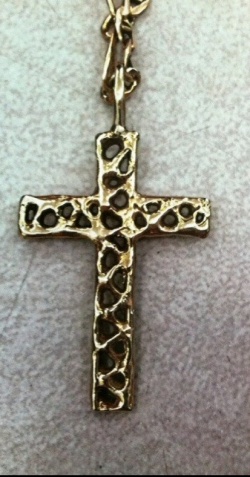 Here is where their story differs from tradition though. According to family legend three treasure chests were actually found in 1795, with each of the three men taking a chest for their own. The sisters went on to explain that a gold cross, which they displayed to those gathered in the War Room, was a part of the treasure held by the McGinnis family- handed down from father to son.

This story has been told before, by Oak Island historian Dan Hennigar, who interviewed one of the sisters a few years ago for a 2007 article that can be read in its entirety here.[LINK IS DEAD]
In his article, Mr. Hennigar writes:

“Ms. McGinnis informed through family legend that three boxes of treasure came out of the ground back in 1795 or thereabouts and that each family member, McGinnis (spelled several ways), Smith and Vaughan each took a box. The three discoverers reportedly were sworn to secrecy and eventually, the story got buried very deeply, if you will excuse the pun.  The tale continues that the McGinnis’ were “swindled out of their rights” and eventually that part of the family, remnants of treasure in hand, ended up in America to pursue a life free of Oak Island and prying eyes.

It's very easy to believe that they found treasure buried not so deep (less than 35 feet), in their first attempt in 1795. And it's reasonable to assume that they would not want it generally known that they had suddenly acquired considerable wealth.  Telling a story of digging for treasure, but being forced to give up, is better than letting it be known that they held great wealth, which would certainly attract the attention of every thief and brigand for miles around. To claim that you found nothing would be a prudent thing in 1795 for the safety of yourselves and your families.  That would be the end of the story but then along comes someone in 1803 that has heard about your failed attempt and wants a chance to pursue it.  Do you confess, or do you allow them to proceed, maybe even hoping that there is more to find.  Either way, it is not easy to step forward and tell the truth at this point.

So what can be confirmed about this story?
We do know that a John McGinnis, descendant of Daniel states that the family lost claim to any future treasure found in the Money Pit  -we assume he refers to the Money Pit and not Oak Island as a whole, as his own land would be his to do with what he wished in that era.  Charles B. Driscoll wrote a story entitled The Oak Island Treasure, which was printed in the June 1929 edition of The North American Review, in which he recounts a discussion he had with John.

It would seem as if John McInnes had faith that there was still treasure to be found. 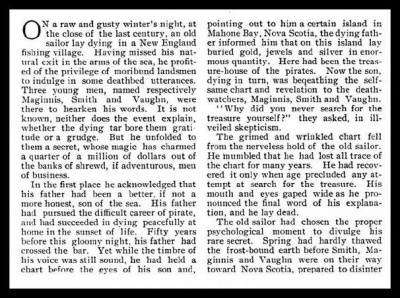 I recently spoke with a former Kings County resident, George McInnes, who is a direct descendant from the  Daniel McGinnis of Oak Island.  We talked about Oak Island, which is something we never got around to doing before he moved out of province.  I was fascinated to learn that my friend’s father and grandfather firmly believed that there was treasure there.  His grandfather had even dug on the island in pursuit of treasure.  His grandfather was born in 1881 and passed away in 1956, so he was likely digging for treasure on Oak Island in the same general era as Franklin Delano Roosevelt’s Oak Island treasure hunting days in 1909.  Of even greater interest was learning that George’s grandfather had an old treasure map that had been passed down in his family through the years.  Imagine being able to look at an old Oak Island treasure map!  I was very dismayed to learn that the map was lost in a house fire long ago.  George says that they tried to recreate the map but never succeeded because “everything changed” and the landmarks were gone.  This information may be supported by early accounts of the Money Pit discovery such as,"A Search for Pirate Gold" written in 1899 by James Clarence Hyde, which specifically mentions that Daniel McGinnis had been in possession of a treasure map. Also a point of interest is that the family also had several really old coins from the island, which were also lost in the house fire.  George and I intend to do some metal detecting this summer, when he is home!
Yet another story that supports the idea that treasure was found by the three men in 1795, comes to us from Diana Young Gregory. Diana is a relative of the Vaughan family and very interested in the Oak Island Mystery.  Her research uncovered a newspaper article from September 9th, 1991, in which a Carl Mosher states

In or around 1925, his grandmother showed him a wooden trunk containing about 25 heavy white canvas bags of gold. His grandmother was Lucy Vaughan, relative of Anthony Vaughan, one of the diggers of 1795. The trunk was said to have come from Oak Island. At some point, Uncle Edward Vaughan took the trunk, and disappeared, leaving his property, business, wife, and family.

More Oak Island treasure lost… another win for the island.

So, there you have it.  Two of the original families have stories of treasure having been in their possession.  What of the Smith family? Circumstantial evidence regarding the Smith family shows us that after 1795, John Smith went on to buy up most of Oak Island, all of nearby Frog Island, part of Birch Island, and partnered with the McGinnis family to buy Long Island.  Not bad for a poor farmer and “failed” treasure hunter.  There just may be some truth in the family folklore. It's also very intriguing to note that famed Oak Island treasure hunter Fred Nolan, claims he found three old empty oak chests when digging in the swamp in the early 1980's.