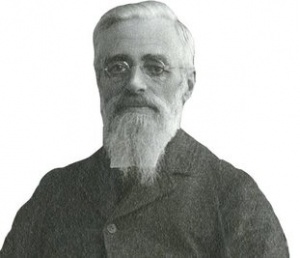 Meet Professor James Liechti; the man said to have deciphered the symbols on Oak Island's 90 Foot Stone.  He was never identified by name, that we can find, until after he had died.  The individual who supposedly decoded the symbols was only described as a school teacher, or professor at Dalhousie University, in articles that made mention of the stone.  Liechti was indeed both.   So was he actually the one?  That question can not be definitively answered yet, but I want to tell you what we have found out about him in our investigation so far. 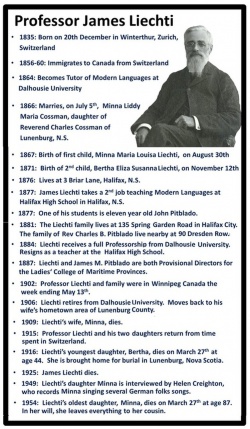 There is no source document (yet found) that identifies Liechti as the teacher/professor that was said to have translated the symbols on Oak Island's mysterious 90 Foot Stone, but after his death in 1925 the idea that it he who had deciphered those symbols seems to have taken root in the minds of most writers and researchers.  Perhaps it was because of his position as a professor of modern languages at Dalhousie University, that people thought he would be the person capable of making sense of strange "writing", or perhaps it was because his personal timeline fit so well with the timeline of the stone.

As we can see in the timeline above, Liechti began work as a modern languages tutor at Dalhousie University in 1864.  He resided in Halifax during this time.  The 90 Foot Stone is thought to have been removed from the fireplace in John Smith's farmhouse on Oak Island as the then current operations were wrapping up sometime in 1865 or 66.  This puts the stone on display in Halifax at the same time as Liechti would have been living and working there.  In 1877 he takes on a 2nd job in the Halifax High School, thereby becoming a school teacher.  Seven years later, he gives up his high school job when he becomes a full professor at Dalhousie University.  During the years he was at the High School there is evidence he knew the PitBlado family.  A John Pitblado was one of his students, and a James Pitblado was a fellow director for the Ladies College.  If you recall, a John PitBlado was said to have pocketed something that came up to the surface while drilling on Oak Island, left the island, and tried, unsuccessfully, to gain the right to hunt treasure on the island himself.  He was soon after killed in an accident.  Were these individuals relatives of that John Pitblado?  This may be something worth pursuing.   Let's for the sake of argument, allow that Professor James Liechti, the man who certainly was in the right place at the right time, did decipher the stone while it was on display at the bookbindery.  It would then be reasonable to say that Liechti had a copy of the symbols/cipher that were on the 90 Foot Stone.   If this were true, then perhaps a copy survived.  No such copy has ever surfaced though, or has it?  Rev. A. T. Kempton produced a copy of the 90 Foot Stone Cipher in 1949. 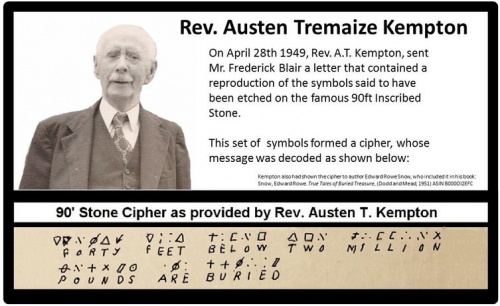 You might be wondering if a copy of the cipher could have made it from Professor Liechti to Kempton. If such a connection could be made, then the Kempton Cipher that everyone is familiar with today, takes on more legitimacy.  Let's take a look at how Kempton said he obtained his copy of the cipher.  An excerpt from the 1949 Letter to Frederick Blair from At. T. Kempton, as found in the R.V. Harris fonds at the Public Archives of Nova Scotia

Kempton writes that he asked a minister he knew to find him someone who could write him a good account of the Oak Island mystery.  The minister found a teacher in the Mahone Bay area who wrote him an such an account, which also included the cipher as we know it.

In his letter, he states that he received this story and cipher in 1909.  Who do we know that was a retired school teacher in the Mahone Bay, Lunenburg County area in 1909, who should also be expected to have a copy of the cipher?

If you check the Liechti timeline above, you will see that Professor James Liechti retired from Dalhousie University in 1906, and he and his family moved back to Lunenburg County to live, the home of his wife.  So Liechti was living in the Mahone Bay area in 1909.  The Liechti timeline also shows us that Professor Liechti died in 1925, seemingly fitting the Kempton scenario in which the teacher had died by the time Kempton tried to follow up on the story (sometime before 1949).

Could Professor Liechti be the school teacher (he taught both at Dalhousie University and Halifax High School) who deciphered the 90 Foot Stone?  Could he also be the teacher from the Mahone Bay area in 1909 who provided the Oak Island Story and a copy  of the cipher to Rev. Kempton?  Liechti's personal timeline certainly provides evidence in support of an affirmative answer to all of those questions.  Of course, it is only circumstantial at best, as most Oak Island evidence seems to be.  On the other hand, if Professor Liechti was indeed both the teacher who deciphered the symbols on the 90 Foot Stone, and the teacher who sent the cipher to Kempton, then the Kempton Cipher gains a little more legitimacy in this whole mystery as it suggests a direct connection between the stone and the Kempton Cipher.  It could just be the only known surviving copy of the symbols said to have been on the 90 Foot Stone.  That possibility warrants further research, because the skeptic in me says it is equally possible that Liechti created the cipher himself for commercial interests back in the days when his salary was half of what the full professors at Dalhousie University were being paid.  There is no proof of him having faked the cipher though, but we are researching this in a non-bias manner and must consider all the possibilities.