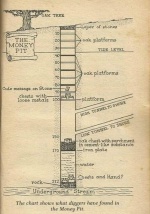 There are many different theories about the meaning of the inscription on the 90ft Stone. The problem is that the location of the stone is no longer known, and no pictures, tracings, or illustrations of any kind have ever been found of the 90 Foot Stone, so we have no detailed idea of what the stone actually looked like.

An entire page has been devoted to detailing the Boreholes as there have been literally hundreds of boreholes dug on the island in an attempt to better understand what lies beneath the ground. Most of the smaller boreholes lack documentation as they didn't reveal anything notable, however, there certainly are those that have provided significant information such as 10X, C1, H8, and GAL. There is not a specific naming convention to the holes as some as named by position in a grid pattern (H8, H5.5, H5), some are named for the people who chose the location (C1 for Charles Barkhouse, GAL for The Lagina brother's parents, DMT in memory of Craig Tester's son Drake).

Although the money pit is the first "Searcher Shaft", it is certainly not the only shaft. It is estimated that at least 30 other shafts have been dug over the years. What is the difference between a borehole and a searcher shaft? Great question! For the purpose of site organization, a searcher shaft is something that was dug out by man or machine and potentially cribbed with wood to facilitate exploration. A searcher shaft may be round, square, horizontal or verticle. Boreholes, on the other hand, are merely a hole drilled in the ground using a conventional drill, and auger, air high-pressure air, and even sound waves. A borehole may eventually turn into a searcher shaft. Recently, the Lagina team has been using large steel cans and an oscillator to dig holes in the money pit area. Based on the size of these they could easily be considered searcher shafts, but since they are drilled vertically I'm considering them boreholes.

When it was discovered by the Truro Company while digging shaft 3 that the water in the Money Pit (and all other shafts) was seawater, the focus routinely shifted to identifying the source of the water. Since Smith's cove was the closest shoreline to the Money pit, it was the first location searched. It didn't take long until a number of intriguing items were found on the man-made beach at Smith's Cove.

Details about the Swamp: Long debated whether the swamp is man-made or natural there are clearly many mysteries to this location. Reviewing the hydrographic layers of the surronding waters it certainly appears that the bottom composition at both the North and South ends of the Swamp are different than the coast line of the rest of the island, but to date nothing definitive has been proven about its age and construction. Fred Nolan found many strange things in the swamp, and the Lagina team is currently doing substantial excavation which they hope will unlock it's mysteries.