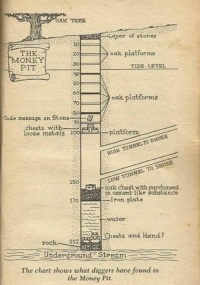 For over 200 years, people have been searching for treasure on Oak Island. There are many books, websites and facebook groups devoted to telling the stories and sharing theories of who, what, where, when, why, and how. This is where all the information comes together! There are many different accounts all with different details about what has been accomplished and many more theories about who, what, where, and why.

It is imperative to mention that there is a very real possibility that there is not, and never was a treasure- all the structures could have been for other reasons (shipbuilding, salt making, ship repair, etc)- The purpose of this site it not to prove any one theory, but to provide a consolidated location where once can research all the information and make one's own mind up- or conduct additional research to support/refute a presented theory.

The basic story is relatively undisputed. In or around 1795, three boys (Daniel McGinnis, John Smith, Anthony Vaughan) found a 12-15ft circular depression in the ground under an oak tree and started digging in search of treasure. In this site that would later become known as "The Money Pit" they found a tightly compacted row of oak timbers roughly every 10ft down. The boys were unable to dig past 30ft without recognizing they needed more help.

Roughly 10 years would pass until they had the resources to continue. In 1804 they returned with the first group of Treasure Hunters. This group would be the first to successfully excavate the pit to a depth of 90ft, encountering strange Artifacts along the way. Specifically links of chain, coconut fiber, blue clay, charcoal, and a mysterious stone with indecipherable characters on it.

Each time a layer of oak timber was found, the team would use a long bar to probe deeper to see if anything lay below, at the 90ft level they believed they found something solid (possibly wood chests or metal) at 98ft. This was Saturday evening, so they opted to come back Monday following church services on Sunday convinced they would quickly retrieve the treasure. Upon returning Sunday, they found that the pit had filled with water to the 30ft level. All efforts to dewater the pit using buckets were unsuccessful and the team was forced to abandon the dig.

Over the next 200 years, many more Treasure Hunting groups and ordinary people would come to Oak Island determined to do better than the previous team using state of the art technology and recover the treasure. Roughly 30 Searcher Shafts (like mine shafts) have been dug, countless boreholes drilled and the treasure still remains unreachable. Through the course of exploration, it has been determined that the source of water that initially thwarted the recovery is salt water, and is believed to come to the pit by way of a flood tunnel originating at Smith's Cove and the South Shore. The remnants of the box drain flood system at Smith's Cove were completely unearthed in the late 1800s, and many unsuccessful attempts were made to block that source of water- which is likely due to the second source at the South Shore.

The majority of the searching has been done in the Money pit area, but there is also many unexplained features in the Swamp area between the two primary drumlins that make up the Elephant-shaped island. There are theories that the swamp is man-made and may contain the keys to shutting off the flood system and/or provide another access to the treasure pit.

In addition to the flood system that makes excavation difficult, there is a mythical curse on the island that states 7 must die in search of the treasure. To date, 6 people have died, leaving many to believe that the mystery will not be solved until one more dies.

Presently, the Island is owned by "Oak Island Tours" which consists of a number of people who also possess a Treasure Trove License allowing them to dig on the island, but they are under strict guidelines to do so responsibly with the assistance of an archeologist. The efforts and much of the history of the Island can be seen on the History Channel show "The Curse of Oak Island."

I also feel compelled to warn you that "The Curse of Oak Island." is a reality TV show that exists to make money for the History Channel. This website is not affiliated with that'show,'or any of the people on the show, so I cannot speak to the fact vs fiction ratio of the show, which is one of the largest reasons I created this website'..'As far as I'm concerned every theory is just as valid as the others until proven otherwise- so take the time to'research'on your own and come to your own conclusions.

Of course, everyone would love to be able to separate the fact from the fiction.. unfortunately, there is just too much misinformation over too long a period to definitively say.

There are plenty of people that believe that there is nothing left to find on the island, and the hunt is merely being strung along for the money it is bringing in for the Lagina brothers and of course the TV production team. While I have no personal interactions with any of the aforementioned groups, I think it is fair to say the following:

There is no magical map that I know of guiding anyone to the treasure, so the key is believed to lie in exploration and historical research. The majority of the information on this site has been obtained through research of newspaper archives, books, and other websites. As a WikiPage, it is open-source such that anyone can contribute content and modify existing information. I only ask that you adhere to the below rules so as to maintain the highest quality repository of information with good referential integrity.

Like any wikisite, the information contained is only as good as it's referential integrity. This site is currently locked from anonymous editing, but anyone can request an account to add/change information as long as the below rules are followed.

Keeping the site structure as simple as possible makes the information easiest to find.