Legend in Nova Scotia talks about a Clairvoyant named Madam Kincade who traveled Nova Scotia and Halifax areas offering her services to the locals. She is attributed to stating something to the effect of "many will die in search of the treasure." This declaration was likely following the first death, but prior to the death of Maynard Kaiser as it was quoted in the newspaper upon Kaiser's death that "Madame Kincaid" had predicted this would happen.  It is unclear how her original statement was changed to "seven people must die." The earliest account found to date that actually assigns a number is the Jan 1957 True Magazine article.

As always, the folks at OakIslandCompendium (Blockhouse Investigations) have done a remarkable job investigating and presenting theories, Here are two of them retrieved from their site (by permission).

Seven Must Die, or Must they?[edit]

By now most people have heard about Oak Island being cursed and that seven men must die before the mysterious treasure reveals itself. In fact, the aptly named reality television show, The Curse of Oak Island, makes full use of the legend. But is Oak Island really cursed? And, if so, whom? Blockhouse Investigations has sought to answer those questions and, not surprisingly, like most of the legends associated with Oak Island, nobody seems to know. The mention of a specific number makes it a rather specific legend so one would think that somewhere there is a specific reference that could lead us to its origins. We do know that a couple of authors writing about Oak Island have attributed it to famed Nova Scotia folklorist, Dr. Helen Creighton, but we’ve found no reference to it in either her published works or her archival material. There are a number of local anecdotes that allude to the island being haunted and that a ghost guards the treasure, but nothing about a curse. Some people say it’s mentioned in her 1957 book, Bluenose Ghosts, and some say it comes from her earlier, Folklore of Lunenburg County, published in 1950. But there is no specific seven must die curse mentioned in either. One thing that Creighton’s work can tell us though is that the legend contains two very common folklore motifs: the magical number 7, and a treasure requiring blood to be shed in order to recover it. The former is almost ubiquitous in treasure and ghost lore- the other number being 3. And the latter is also a common theme that’s normally based on the belief that blood was shed when the treasure was first gotten or when it was buried so, therefore, it must be shed to recover it. Although several newspaper accounts over the past two centuries have made use of allusions to the island being haunted and/or cursed in some way, we’ve yet to find specific mention of the seven must die motif or information on the origins of the curse.

“Men fear death as children fear the dark, and as that natural fear is increased in children by tales, so is the other”- Francis Bacon

There is a tradition handed down in the McGinnis family, descendants of famed Money Pit discoverer Daniel McGinnis (Donald MacInnes), that the Mi’kmaq in the area placed a curse on them but it only applies to McGinnis men for some reason. And, of course, immediately following the 1897 death of worker Maynard Kaiser stories sprang up that his demise was no accident but the work of the supernatural- in fact, the ghost of Captain Kidd himself. But once again, neither of these makes specific reference to a seven must die curse. Recently a bit of a sensation resulted from the untimely death of a young producer on The Curse of Oak Island’s production team. This was shamelessly exploited and sensationalized by a self-styled treasure hunter who had made a brief appearance on the show. The gist of the many unfounded rumors that began to spread was that, perhaps, this young man’s death represented the 7th and that the treasure may now reveal itself. We won’t comment on how deeply repulsed we were by these repugnant rumors that led to this man’s death being discussed in the most uncaring and insensitive way. But we will say that it was shameful and was made even more so by the people right here in our home province who, not only bought into it but fueled it with more rumor and nonsense.

“If you want to tell a grownup fairytales, you have to look for the dark side” –Juan Antonio Bayona

Regardless, even if there was any truth at all to the legend, we have no way of knowing that the six people whose names appear on Oak Island's monument to fallen treasure hunters are the only diggers who have died on the island. McGinnis Family tradition has it that sometime before 1827 young Henry McGinnis, son of Daniel, drowned when the pit flooded- presumably the Money Pit. We’re continuing to investigate. Although we can’t yet tell you the origins of the Seven Must Die curse, we can tell you that it has never been an intrinsic element of the telling of the Legend of Oak Island. This leads us to think that it may be something that is relatively new and, either totally made-up or the result of a misinterpretation of local folklore. We are continuing our research into the legend and hopefully, we will be able to establish how it came to be. We welcome any thoughts and comments our readers may have on the subject.

In closing, I’ll leave you with a quote from a fisherman and storyteller whom Dr. Creighton interviewed when collecting folklore,

“Sometimes I tell the truth and sometimes I don’t”.

This reminds me of what I often tell kids when I’m entertaining them with tall-tales,

“All my stories are true except for the ones I make up”.

Folklore, although it may often have an intrinsic relation to a real event, is after all just folklore. And I personally feel that it behooves serious and ardent Oak Island enthusiasts to recognize it as such. Don’t get me wrong, the legends and myths in the Oak Island mystery are great. They are fun, interesting and intriguing. They add color, mystique and a unique Nova Scotia flavor to the entire story. But in the end, they are not evidence. Here at Blockhouse, we’ve been accused of being outright skeptics and we’ve even been accused of seeking to destroy the entire Oak Island mystery by disproving everything. Nothing could be further from the truth. And the truth is the operative word. 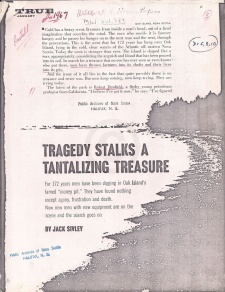 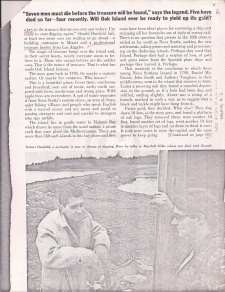 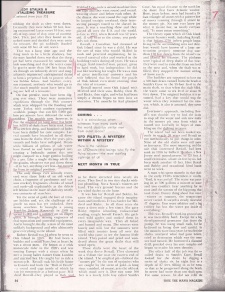 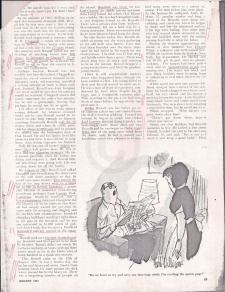 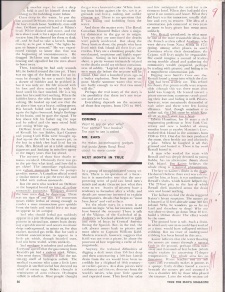 In any investigation, a new development can arise giving us reason to revisit a topic we've already reported on. Today we're happy to report that we've just found a magazine article that sheds more light on the possible origin of the, now famous, curse that features prominently on the History Channel's series, The Curse of Oak Island". Readers may recall that we touched on the subject in our February 11th 2016 article Seven must die! ...or must they? (quoted above)

We've continued to investigate and have discovered the curse mentioned in the 1960s American publication, True, The Man's Magazine.
In January of 1967, not so very long after the Restall tragedy of August 17th 1965, True magazine featured an article, written by Jack Sivley, entitled, "Tragedy Stalks a Tantalizing Treasure". The author of this article writes an excellent review of the treasure hunt on the island, of the Restall family's part in that hunt, and introduces us to the newest treasure seeker, Robert Dunfield, who Sivley describes as, "a fleshy young petroleum geologist from California". Sivley seems to have visited the island and interviewed Dunfield and several others before writing this article.

So who is responsible for the first known citing of the Seven Must Die curse?  Is it an embellishment created by Sivley for his article?  In the article itself, Sivley credits a Nova Scotia resident, a pretty woman intimately related to the deaths, as the one to tell him about the curse, as seen in the following excerpt from his article which states:

"But along the Nova Scotia shore, the people who have lived with Oak Island all their lives are restless. They are charming people, but uneducated, suspicious, and highly superstitious. Sitting in her kitchen on the shore, a pretty woman intimately related to the deaths could say without consciousness of oddity. "Legend says that seven men must die before the treasure will be found. One died a hundred years ago in a boiler explosion. Now four more are gone. Maybe someone wants that treasure badly enough for two more to die."

We draw your attention to the fact that the woman mentions the unknown person who died in the boiler explosion, and the four who died on that fateful day in 1965, but she didn't account for the death of Maynard_Kaiser, who died from a fall down a shaft on Oak Island in 1897. It's evident that she's only accounting for five deaths when she says, "Maybe someone wants that treasure badly enough for two more to die".

Sivley doesn't identify the woman by name, only that she was intimately related to the deaths. Four people died that tragic day. Robert Restall was the first to topple into the shaft. His son Bobbie (age 23) saw this happen and rushed to his father's aid, but he too was outcome by gas in the shaft.  A man named Karl Graeser, a longtime friend and financial backer of the Restalls, without hesitation, went into the shaft to save the two men. He quickly succumbed to the gas as well. Then Cyril Hiltz (age 16), and Andy DeMont (age 17), both members of the work crew, descended into the shaft, and both collapsed near the bottom.  Two other men who had started down the shaft retreated to the surface. A tourist from Buffalo, New York, a firefighter named Edward White managed to save DeMont, who afterward said that he was choking on the gas and felt like his legs were failing.

So if we consider who this "pretty woman" was, then we have to consider the families and friends of those who died that day. This same article tells us that Bobby Restall and Cyril Hiltz were both in love and hoping to soon be married. Perhaps our unnamed woman was one of their fiancées, or a sister, mother or another family member of those involved.  Whoever she was, we wonder did she fabricate the legend or was it something she heard from another source? For now, it remains a mystery.
Picture

So we now know that the "Seven must die" curse existed as early as 1967 and that an anonymous local Nova Scotian woman, is the earliest person on record to speak about it. Whether the curse existed before this article, we can't say, since we've found no previous mention of it.  We suppose it is possible Sivley created the idea of the curse himself, but we should extend him the courtesy of believing that it came from his unnamed source.

At this time we can say that the legend has been around for at least 49 years now. Our investigation continues, but for now we hope this information is of interest to all of who've been asking about  the curse since it became such a popular, and rather sensational, aspect of the Oak Island mystery.