The Oak Island Folly is an article published in the Liverpool Transcript in 1861 effectively debunking all the work that had been completed. As a rebut to this article "Digger Patrick" wrote a letter to the editor of the Nova Scotian with critical details he reports as an eye-witness account. 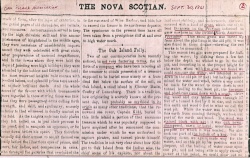 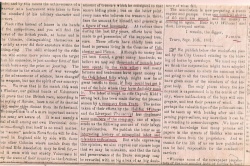 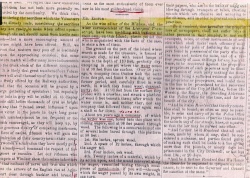 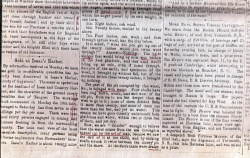 [1]Men have been diligently at work, nearly every Summer, for the last ten or twelve years, on Oak Island, near Chester Basin, in search for treasure supposed to have been buried by Captain Kidd, a noted pirate, a century ago. We think that it is an act of the merest madness to continue such a work or to hope for any success. Kidd was not so fond of labor as to dig 126 feet into the bowels of the earth to hide gold, or any body else in these late centuries of the world's history. Our readers can form some idea of the extent to which this folly is carried when we state that about $20,000 dollars have already been expended in this search for treasure. There are at present sixty-five men and thirty-five horses constantly employed night and day in three pits, which now reach a depth of 126. These excavations are in the shape of an oblong square, twelve by fifteen feet and boxed in with timber. A passage-way is dug at the bottom to each pit so that in case of a collapse the miners can escape to either hole; here it is quite dark, cold and damp; the miners are obliged to carry lamps on their caps and be relieved every two hours. The inflow is very great. Gins and whimsies are constantly at work, raising dirt, stones, and water. According to the theory on which these deluded people are proceeding - the money had been buried and sluices or communications with the sea, so constructed, that the localities of the treasure was flooded, while the vicinity was comparatively dry.

It was thought that about a fortnight ago they had struck upon the treasure; a day was set on which the copper-bound casks were to be raised from their long resting place - expectation grew high - shares sold at an enormous premium - hundreds of people flocked from all directions, and while each one was straining his eyes to get the first glimps of the gold the middle hole "caved in," and disappointment was soon pictured on the countenance of each one present. It was a providential thing that no lives were lost - several were badly injured. The work is still pushed forward with renewed vigor, and as soon as the bullion is recovered and the amount ascertained we promise to inform our readers.