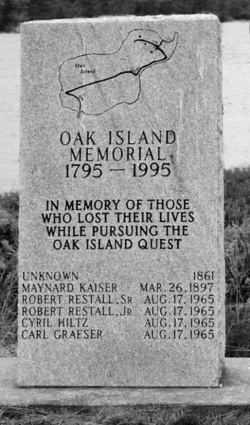 Editor Note: Dan Blankenship, Fred Nolan, and Zena Halperndied of natural causes. They are not considered part of the tragedies of Oak Island. Their obituaries are included on their personal pages'.'DrakeTesterhas also been associated with Oak Island, and while his untimely death is truly a tragedy it is not relevant to any folklore. Any comments made by disrespecting him or his family will be immediately removed. 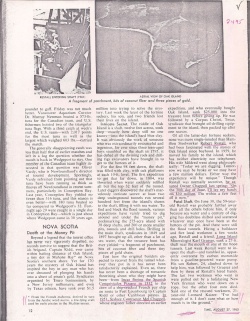 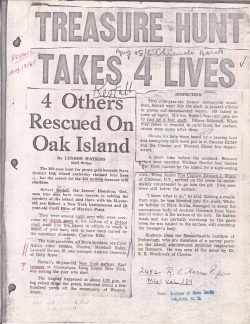 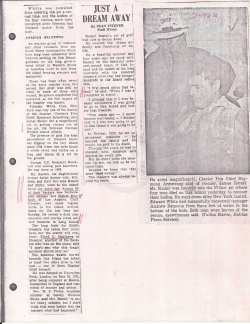 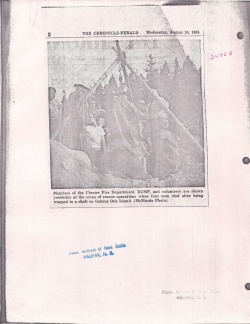 The death of Robert Restall, Bobby Restall, Cyril Hiltz and Carl Graser is one of the greatest tragedies of the Oak Island Hunt. There are countless articles that tell the story linked below- but none of them truly do justice to telling the truth of Heroism that occurred on that day. While the loss of four people is horrific, there could have very easily been many more as the thought of personal sacrifice was never considered in the goal to save even one man.

By all accounts, Robert senior was effectively finished for the day and was checking the pump that had been placed in Restall Shaft #1 which had been dug two years earlier. M.R. Chappell's account[2] states that Restall had just discovered that this shaft and the new shaft he was working on were believed to be connected in some manner and he had dumped two barrels of colored gasoline into the shaft in an attempt to prove his theory. He was seen looking into Pit 1 and being overcome by something causing him to tumble into the shaft. His son Bobby (Robert Jr), Cyril Hiltz, Carl Graeser and Andrew Demont all ran to his aid. Bobby was first down in the shaft and was able to tend to his father for a short while, but in just a few minutes all the men in the shaft were overcome by the gasses.

A tourist (Audrey White) was en route to the island by boat of pure Oak Island curiosity when he learned of the tragedy and encouraged the boat driver to allow him to proceed as he was a trained firefighter with skills in rescue. When he arrived on the scene he wrapped wet rags around his mouth and proceeded into the shaft. He was able to recover Andrew Demont from the pit and resuscitate him, but all others had already drowned.[3]

All present recall various visions of the gases ranging from green and yellow to brown, and all mention the strong odor of rotten eggs. The official coroner report states the deaths were due to drowning, but most believe it was due to either some form of swamp gas (methane, Hydrogen Sulfide) or carbon monoxide from the nearby engines. Although Chappell believed that Restall had dumped gasoline into the pit since none of the other reports talk of the smell of gasoline I don't believe this was the cause. If the gasoline theory is true it is possible that the gasoline caused a chemical reaction that created some other form of noxious gas, but it's clearly too far in the past to determine that now.