There is not a lot known about the south shore right now. There are theories that there are two flood systems, one from Smith's Cove, and one from South Shore, but other than circumstantial evidence from Dye tests and muddy water this hasn't been proven. Probably the most interesting evidence is the ice holes discovered by Dan Blankenship, but this has not been proven to be anything more than a strange anomaly.

The following report comes from Dan Blankenship's records from Mar 21, 1979

"Report on four flooding systems discovered in ice during extreme cold spell in February 1979. During Feb. past, we had two weeks of bitter cold weather. The ice froze in Mahone Bay, from Chester to Lunenburg. Using our derrick for an observation vantge point, it appeared that the ice extended all the way to Tancook Island. We estimated the thickness to be from 5 to 6 inches just south of the island where the enclosed pictures were taken.

As soon as the bottom becomes workable we shut off our large pump. By constantly checking the water level in the 6" hole adjacent to 10-X we know when the water is rising close to where we are working and then we turn the pump on, until the water gets down to about 125 - 130 ft. again. This way we save a considerable amount of fuel. Each evening we shut the pump off until the next morning.

By diligently monitoring the water levels, especially on recharge we have pretty much established the fact that a large reservoir exists between 95 to 115 ft. This has been repeated many times and the recovery is quite constant. the enclosed graph shows the water recovery rate [Editor's note: Graph is missing from report].

After a few days of extreme cold and the bay was frozen over, we noticed an area to the south that wasn't frozen, however, it was hard to really make out any distinct shape at first.

The colder it got and the more the ice froze, the more distinct the shapes became. the enclosed sketch shows the shapes that eventually resulted, before we had a mechanical break-down, that shut our pump down for about four days"

"We noticed a thin film of ice forming after the second day we were shut down and by the fifth day when we finally started pumping again, the whole area was frozen to approx. 1 to 1 1/2 inches.  the difference in the ice could clearly be seen for several days until the weather changed and we got fog and rain. 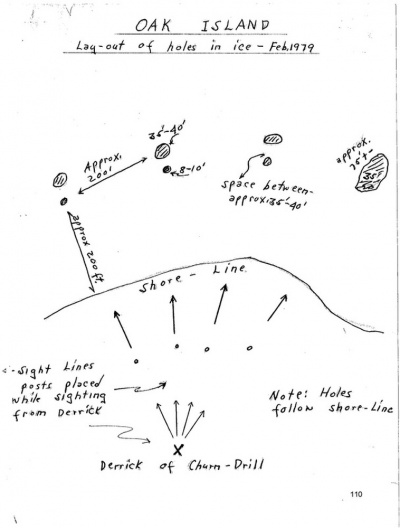 "Using our derrick for a vantage point, sight lines were spotted and steel pipes driven in the frozen ground so that we wouldn't lose these locations when the ice melted.

As soon as the ice melted, I went out in a row boat and a view box, which I made up in 1965.  The whole area was riled up and you couldn't see the bottom.  However, you could see air bubbles rising in the water on our sight lines.  when the weather and conditions are right and I have the time, I will again put the view-box to use, and I am certain these area can be pin pointed accurately.

Of course, the conclusions that we came to are obvious.  During thee day, our pumping dewaters the flood tunnels.  Monitoring the recharge seems to place this area between 95 and 115 feet (The wide spread is to be expected, if the tunnels are inclined).

After we shut the pump off, the water again fills up the flood tunnels.  However, air occupies the space that was water filled.  Consequently, the air is compressed as the tunnels fill and a considerable amount escapes thru their tunnels to their vertical shafts and their collection area in the ocean.

We know that this is true, because much of this air can be heard coming from the pumping hole after it is shut down for a while and the water is recharging.

Back in 1973 - 74 we had a similar incident regarding a flood tunnel.  We had the water lowered in 10-X to about the 100 ft. level and we had a driver from Liverpool down 10-X.  The water was clear until he reached the depth of 181' where the casing is partially seated in bed-rock.  Muddy water was coming into 10-X from an elliptical space about 3" x 12" between the 27" casing and the bed-rock.  He went below this area but couldn't see anything because of the muddy water and so terminated the dive.

Upon searching around Smith Cove, we found an area just north of our coffer dam that was all riled up and the water muddy.  I took pictures showing this condition clearly.

Seeing the area was close to the shore we hired a bull-dozer and pushed earth over the suspected area.

A week later we hired the same diver again and he repeated the dive under the same conditions.  This time, no mud came under the casing and he went to the bottom with the visibility remaining good until his shoulders hit the rock walls entering the cavity at the bottom, partially obscuring his vision.

When the weather improves and we have the finances , we can use this same principal to cover the areas found in the ice.  However, seeing these are out approx. 200 ft. in about 7 - 8 ft. of water, dumping dirt on them isn't practical and won't work.

They have concrete pumpers available that pump concrete up a 3" hose, maybe as much as 20 stories high.  It seems to me to be the most practical method to employ in order to greatly reduce or maybe even stop the water from coming from these particular locations.  I believe that these are at least the most active if not all the water coming into this particular system.

The application of the concrete would be quite simple, with a diver walking on the bottom and by using the 3" concrete hose, place about 3 to 4 inches of concrete over these area.  Of course these areas would be clearly defined with markers before starting with the concrete.  The road is good right to the shore at this location so getting the material close wouldn't be a problem.  Naturally, we would check with an engineer first to find out what thickness of concrete would be sufficient, as well as what kind, if any, of additives should be incorporated in the concrete mix to facilitate quick setting of the concrete place in salt water with a minimum of separation."

There are no records of attempts to seal the tunnels from the South Shore as Dan indicated he would, and no further mention of the ice holes until this report in 1987.

"We first noticed these holes in the ice in Feb. 1979.  It was bitter cold and the bay had frozen over with about 2 to 3 inches of ice.  We were working enlarging our shaft from the existing 27 inch casing to about an 8 foot diameter steel and concert shaft.  In order to conserve fuel we would shut the pump off each night, and restart pumping very early in the morning.  At that time it took about 1 1/2 to 2 hours to dewater.  It was while the shaft had reached the level of about 105 to 110 ft. that we noticed the phenomenon of the spaced holes in the ice.  When we first noticed them, there were four sets of holes widely spaced of two holes each.  These holes were quite symmetrical in that they contained two holes each of about 25 to 30 feet and the holes aligned themselves at right angle to the beach, in other words, one hole behind the other.  The hole to the right apparently was the most active and it enlarged itself to compass both small holes into one.

At that time it was assumed that we had reached a level of man made flood tunnels, out dailey pumping dewatered these areas.  when the pumps were shut off for the night it allowed these areas to fill up and the compressed air found its way thru the system where the warm air bubbles prevented the direct area above them to freeze.

This conclusion seemed to be confirmed this last February when the same phenomenon occurred again.  The ice had formed on the bay, but not as thick as in 1979.  We were working in our shaft at about 127 feet when our shaft broke on our pump and the area recharged with ocean water.  The next day the ice holes appeared in the same location.  We took pictures of this occurrence again but have not been able to locate these pictures.  Before we had a chance to hire an airplane to take pictures, the wind came up and broke up the ice.

I have talked with people from the Dept. of Fisheries who do a lot of flying and asked them if they have ever seen any holes like this in the bay, and they said "NO".