While a simple treasure map with a big X on it would certainly make life easier, due to the vast information gap between the initial discovery, potential language barriers, and false information propagated the use of technology has been crucial to finding clues on the island.

[1][2]The Ultrasonic/Sonic Driller/Corer (USDC) is a drilling device that uses vibrations in order to hammer its bit through materials, as opposed to traditional drilling methods. The drill uses a piezoelectric actuator as its source of power, and utilizes a variety of 'horns' to vibrate, or hammer, its bit through the material.[1][2] A prototype of the drill was first released by NASA in April 2000, which weighed 1.5 lb. (.7 kg) and had the capacity to drill half-inch holes into granite using only 10 watts of power,[3] whereas the modern household half-inch drill requires 750 watts.[4] The USDC was originally designed to be able to drill through very rigid rock surfaces that would otherwise be damaged by a rotary drill, but has also shown potential usefulness to the field of medicine. It is the specific characteristics of the drill that make it ideal or practical for certain situations.

[3]Radiocarbon dating (also referred to as carbon dating or carbon-14 dating) is a method for determining the age of an object containing organic material by using the properties of radiocarbon, a radioactive isotope of carbon.

The method was developed in the late 1940s at the University of Chicago by Willard Libby, who received the Nobel Prize in Chemistry for his work in 1960. It is based on the fact that radiocarbon (14
C) is constantly being created in the atmosphere by the interaction of cosmic rays with atmospheric nitrogen. The resulting 14
C combines with atmospheric oxygen to form radioactive carbon dioxide, which is incorporated into plants by photosynthesis; animals then acquire 14
C by eating the plants. When the animal or plant dies, it stops exchanging carbon with its environment, and thereafter the amount of 14
C it contains begins to decrease as the 14
C undergoes radioactive decay. Measuring the amount of 14
C in a sample from a dead plant or animal, such as a piece of wood or a fragment of bone, provides information that can be used to calculate when the animal or plant died. The older a sample is, the less 14
C there is to be detected, and because the half-life of 14
C (the period of time after which half of a given sample will have decayed) is about 5,730 years, the oldest dates that can be reliably measured by this process date to around 50,000 years ago, although special preparation methods occasionally permit accurate analysis of older samples.

Research has been ongoing since the 1960s to determine what the proportion of 14
C in the atmosphere has been over the past fifty thousand years. The resulting data, in the form of a calibration curve, is now used to convert a given measurement of radiocarbon in a sample into an estimate of the sample's calendar age. Other corrections must be made to account for the proportion of 14
C in different types of organisms (fractionation), and the varying levels of 14
C throughout the biosphere (reservoir effects). Additional complications come from the burning of fossil fuels such as coal and oil, and from the above-ground nuclear tests done in the 1950s and 1960s. Because the time it takes to convert biological materials to fossil fuels is substantially longer than the time it takes for its 14
C to decay below detectable levels, fossil fuels contain almost no 14
C, and as a result there was a noticeable drop in the proportion of 14
C in the atmosphere beginning in the late 19th century. Conversely, nuclear testing increased the amount of 14
C in the atmosphere, which attained a maximum in about 1965 of almost twice what it had been before the testing began.

Measurement of radiocarbon was originally done by beta-counting devices, which counted the amount of beta radiation emitted by decaying 14
C atoms in a sample. More recently, accelerator mass spectrometry has become the method of choice; it counts all the 14
C atoms in the sample and not just the few that happen to decay during the measurements; it can therefore be used with much smaller samples (as small as individual plant seeds), and gives results much more quickly. The development of radiocarbon dating has had a profound impact on archaeology. In addition to permitting more accurate dating within archaeological sites than previous methods, it allows comparison of dates of events across great distances. Histories of archaeology often refer to its impact as the "radiocarbon revolution". Radiocarbon dating has allowed key transitions in prehistory to be dated, such as the end of the last ice age, and the beginning of the Neolithic and Bronze Age in different regions.

[4]Dendrochronology (or tree-ring dating) is the scientific method of dating tree rings (also called growth rings) to the exact year they were formed. As well as dating them this can give data for dendroclimatology, the study of climate and atmospheric conditions during different periods in history from wood.

Dendrochronology is useful for determining the precise age of samples, especially those that are too recent for radiocarbon dating, which always produces a range rather than an exact date, to be very accurate. However, for a precise date of the death of the tree a full sample to the edge is needed, which most trimmed timber will not provide. It also gives data on the timing of events and rates of change in the environment (most prominently climate) and also in wood found in archaeology or works of art and architecture, such as old panel paintings. It is also used as a check in radiocarbon dating to calibrate radiocarbon ages.[1]

New growth in trees occurs in a layer of cells near the bark. A tree's growth rate changes in a predictable pattern throughout the year in response to seasonal climate changes, resulting in visible growth rings. Each ring marks a complete cycle of seasons, or one year, in the tree's life.[1] As of 2013, the oldest tree-ring measurements in the Northern Hemisphere are a floating sequence extending from about 12,580 to 13,900 years.[2] Dendrochronology derives from Ancient Greek: δένδρον ('dendron'), meaning "tree", χρόνος ('khronos'), meaning "time", and -λογία (-logia'), "the study of".[3]

The Spectrum 90 with pan, tilt and zoom is one of the most popular Inuktun cameras on the market. With a 40x zoom, 1/4in CCD color camera, the SP90 provides 460+ TV lines of resolution at 1.5lux sensitivity. At a diameter of only 3.5in / 90mm, the Spectrum 90 can go almost anywhere you need to see.  The current model features variable intensity LED lighting with improved brightness and two laser lines at a fixed separation to assist the user with measuring objects and defects.  The camera is offered in both aluminum and stainless steel, with a depth rating of either 100ft / 30m or 1000ft / 300m. 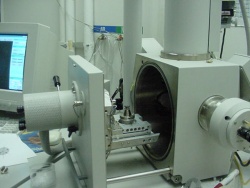 [6]scanning electron microscope (SEM) is a type of electron microscope that produces images of a sample by scanning the surface with a focused beam of electrons. The electrons interact with atoms in the sample, producing various signals that contain information about the surface topography and composition of the sample. The electron beam is scanned in a raster scan pattern, and the position of the beam is combined with the intensity of the detected signal to produce an image. In the most common SEM mode, secondary electrons emitted by atoms excited by the electron beam are detected using a secondary electron detector (Everhart-Thornley detector). The number of secondary electrons that can be detected, and thus the signal intensity, depends, among other things, on specimen topography. SEM can achieve resolution better than 1 nanometer.

Specimens are observed in high vacuum in conventional SEM, or in low vacuum or wet conditions in variable pressure or environmental SEM, and at a wide range of cryogenic or elevated temperatures with specialized instruments.[1] 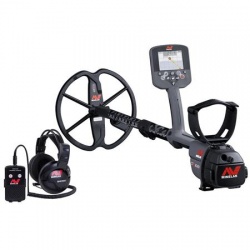 The Minelab CTX 3030 metal detectoris the top of the range high performance treasure detector with the most accurate discrimination available for rejecting junk targets. Packed with advanced features such as Target Trace, GPS, PC Mapping and the freedom of wireless audio it is the ultimate in the Minelab range of Treasure, Coin & Relic Metal Detectors. A simple switch on and go metal detector with a number of additional coil options and waterproof down to 3m it is sure to have unearthing many valuable treasures from the past. Suitable for use on the beach, in the park or anywhere that people have lost valuables from the past.

With a full colour LCD and advanced Target Trace discrimination you will find more treasure, even amongst junk littered areas, in all ground conditions. Enjoy the freedom of wireless audio with the versatility of built-in speaker and headphone options. With Minelab’s exclusive integrated GPS, you can navigate to your favourite locations and record your finds. Transfer your detecting information onto Google Maps using the XChange 2 PC application. 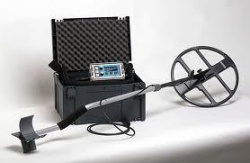 The Lorenz Deepmax X5 / X6 is based on the nonmotion; Pulse GBS ( Pulse Ground Balancing System ). Short & intensive magnetic pulses are emitted by means of a search coil first. Those magnetic pulses produce eddy currents in conducting materials like metal objects for example. These eddy currents will be kept in a metal object and will die away after the magnetic pulse emitted by the search coil has turned off. This is the reason why it is possible to detect those eddy currents during the time delayed receiving phase by means of the same search coil which now acts as a receiving coil. A electronic circuitry is necessary to detect those tiny voltage changes and has to separate that particular signal from interference also received. The signal has to be amplified to drive a voltage controlled oscillator ( VCO ), which emits an audible signal either by headphones or built - in loudspeaker when a metal is in the near of the field of the coil Eddy currents produced in a metal object by means of a pulsed primary field, will die away differently depending on the conductivity of the metal object. The classification circuit therefore gives a visual time delay reading for the eddy currents received over a certain period of time. In addition a ferrous / non - ferrous indication for every metal being detected is working when a double D coil is in use. This gives further information on the probable kind of metal being located as well as the audio sound emitted, which makes it easy to predetermine the exact place and the size of the buried metal object. The Pulse GBS principle has got the advantage of using large diameter coils and high transmitting power. This is especially necessary when searching at depth.Frame mounted cable coils of different size and shape can be connected to the Lorenz Deppmax - X5 / X6 without any adjustments. 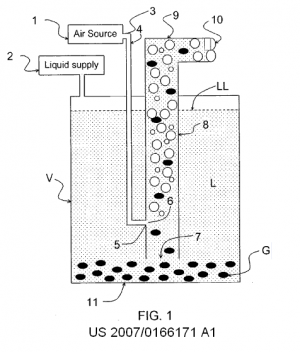 Diagram of an airlift pump

An airlift pump is a pump that has low suction and moderate discharge of liquid and entrained solids. The pump injects compressed air at the bottom of the discharge pipe which is immersed in the liquid. The compressed air mixes with the liquid causing the air-water mixture to be less dense than the rest of the liquid around it and therefore is displaced upwards through the discharge pipe by the surrounding liquid of higher density. Solids may be entrained in the flow and if small enough to fit through the pipe, will be discharged with the rest of the flow at a shallower depth or above the surface. Airlift pumps are widely used in aquaculture to pump, circulate and aerate water in closed, recirculating systems and ponds. Other applications include dredging, underwater archaeology, salvage operations and collection of scientific specimens.