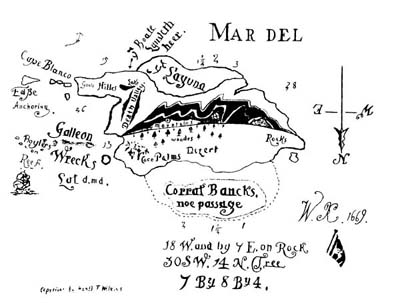 August 1937, R.V. Harris, a lawyer for Gilbert Hedden discovered a treasure map in a book called Captain Kidd and His Skeleton Island. The book, written by Harold T. Wilkins had a treasure map that rather closely resembled Oak Island. According to the book, this map and three others had been hidden in false compartments of three sea chests and a desk, all purported to have been owned by Captain Kidd. The map was dated 1669 and contained a pictorial reference of Oak Island and additional directions to finding the treasure. Most astonishing was a bid red dot in the vicinity of the Money pit.

Hedden sought out Wilkins in an attempt to obtain additional information, but was informed by Wilkins that not to "waste any time trying to identify this eastern [hemisphere] island of Kidd with Oak Island". The directions are written on the map:

He believed that if these were valid references, he could backtrace them to find markers on the island. It was then that Chappell informed him of the stone triangle they had found on the shore in 1897, and again in 1931. He also told of granite boulders with holes drilled in them north of the Money Pit. Hedden was successful in finding the drilled stones, and the stone triangle, but he still wasn't satisfied that all these clues were directing him to the right location. 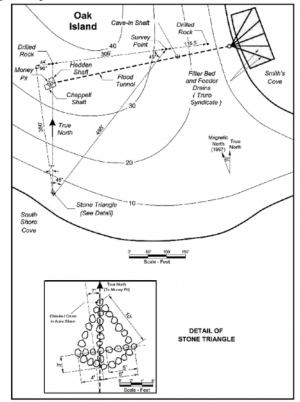 Hedden commissioned Charles Roper, a land surveyor to mark off the locations and bearings of these objects. He then used the directions on the Mar Del map to pace off the directions and found that many of these clues led him toward the money pit.

When Hedden pursued Wilkins further to explain the map, he was told that the map was a complete fabrication drawn only at the request of his publishers for the book. Hedden did not, however, accept this explanation, and chose to dig further.

Upon further investigation, this is the story that unfolded.

[2]In the early 1930s, Hubert Palmer acquired a desk believed to have been on one of Kidd's ships, the "Adventure Galley." Inside this desk, Hubert found four hidden compartments that contained maps. Two of the compartments were made from false bottoms, one behind a mirror, and the fourth in a small hole that had been drilled in a side runner of the desk.

The maps were presented to the British Museum for authentication. The museum's map team, under the direction of R.A. Skelton reviewed the charts and made hand-drawn copies of the originals with notes of what he was able to make out from the writings and markings.

Harold Wilkins claims to have seen the charts during a visit to the museum and had examined them. Wilkins claims that these were the basis for the maps used in illustrating his book. Hedden followed up with Wilkins about all the similarities between his map, and the artifacts found on Oak Island specifically requesting additional information but was effectively shut down in every correspondence. 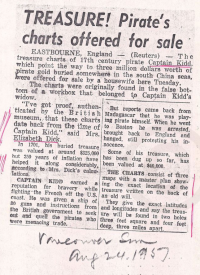 [3]Palmer had held on to his charts until his passing in 1949 at which time he left them to Mrs. Elizabeth Dick, the nurse who had taken care of him the last eleven years of his life. Mrs. Dick died in 1965, but prior to dying, 1957 she sold the charts for $50,000. The auction house that brokered the sale identified the buyer only as an agent of "A North American/ Canadian Syndicate." From this point on, the charts have not been seen.

The following letters substantiating this story were obtained from OakIslandMystery.com archives and used with permission

The trail doesn't end in the 1930s though. In 1957 it appears that the quest for information about these charts comes up again, as Wilkins writes a letter to Mr. Ruper Furneaux in response to his request for additional information regarding the Palmer Charts.

The Palmer-Kidd maps were actually sold to a partnership in Canada (Toronto) in 1956, not in 1950 (which was the date of the initial approach.) I know the name of one of the partners, and probably that of the other - whose identity should be fairly easy to confirm. In 1975, the maps were in a safety deposit vault in Winnipeg. I imagine that the partners may no longer be alive, and it's surprising that nobody has heard of the maps in the past 40 years, in view of the widespread interest and the possible change of ownership. However, the last I heard, the senior partner was the only one with access, and it's to be hoped that he didn't die without passing on the key!

[4]Randall Sullivan records in his book Curse of Oak Island that the Curse of Oak Island TV production company asked him to see if he could obtain copies of the charts made by R.A. Skelton, which he was able to do in 2009, but when he received them he was "terribly disappointed." His description of them follows:

"The famous charts were crudely hand-drawn maps of what appeared to be the same vaguely shaped boomerang-shaped island. The island wrapped around what was marked as "Lagoon" on three of the four maps, with a simple directional chart that was identical on all four of them. There were some variations; an area on the opposite side of the island from teh lagoon was marked 'Sand and coral' on two of the maps, but it had a notation that read 'Wood - 20 Turtles' above markings for twin 'reefs' on another. One map did note two hills on the island, but they were right next to one another rather than at opposite ends of the island. The most detailed map identified the body of water beyond the lagood as 'China Sea'. There were a list of directions and bearings on two of the treasure charts, but they were quite different from those on Harold Wlkins's Mar Del Map. "

[5]Frederick Blair learned of the Smith chart that had originated in Boston. The story as it was told talked about pirates digging tunnels and a booby trap system to flood the treasure shaft. One of the crew from this ship sketched out a chart of the location and gave it to a young sailor who gave it to a Halifax harbor pilot (Amos Smith). The harbor pilot held on to the chart until he was older at which time he gave it to his grandson. The grandson is apparently the one that connected the map to oak island. R. V. Harris later interviewed the grandson (James H. Smith).

Everything Mr. Smith said appeared to line up with Oak Island, except that James' grandfather Amos Smith had never been a Halifax Harbor pilot, only St. Margaret's Bay, which is nearby, but not in Halifax. Harris believed that Smith had fabricated the story based on news articles.

[6]In 1885 a man showed up in Chester with an old chart asking questions about the progress on Oak Island. He was not the typical treasure hunter that the people of Chester had grown accustomed to, but he was motivated to search for something. He purchased a sloop from a local man (Pickels) and spent quite some time off the coast of Oak Island measuring the position of the sun and consulting his chart. He repeated his investigations for two full summers, and then disappeared never to be seen again. The gentleman that had sold him the sloop (Pickels) followed his pattern of measuring the sun's position and attempting to follow compass directions based on information he claims he was provided by Allen. Pickels repeated this routine for three summers ad then gave up the search himself.

[7]A Search for Pirate Gold by James Clarence Hyde claims that Daniel McGinnis once had a treasure map as well. There was never a mention of this map through all the years of searching though. It wasn't until the 2000s when a descendent of Daniel (George McInnes) told a local investigator that he had known of this map, and had it in his possession until the 1920s when it was destroyed in a house fire.

[8]In 1934, Frederick Blair was offered a map by a Saskatchewan man named W.J. Doyle. He claimed that his father hired an old man named Jim Thompson who had taken a liking to Doyle and left him a treasure map for his kindness. He claimed that he used to study it frequently, but it too was lost in a fire years prior. He claims that his map was very detailed and described how the water came in, and how to shut it off. Blair corresonded with Doyle for quite some time and obtained many details that corresponded to things already known about the island, but eventually decided that the story was far too detailed for having not seen the map in over 30 years. R.V. Harris took the liberty of interviewing Doyle for Blair and came to the same conclusion as many of the pertinent facts originally shared with Blair had now changed when interviewed by Harris.

There was another account of this "Doyle Map" presented to Gilbert Hedden. It is not clear if it was the same Doyle, but Hedden was quick to realize that the map Doyle was presenting was effectively Wilkins' Mar Del Map with some minor modifications. 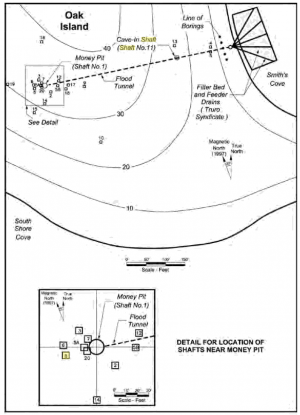 The exact location of the money pit has been lost for quite some time and consequently has been the target of most of the recent drilling operations. This image shows all the known shaft, boreholes and drilling that has taken place in the area of the money pit. 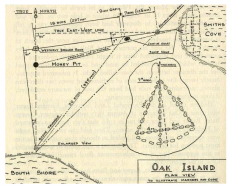 The report of 1965 and 1966 by Dan Blankenship is explaining the stone triangle and the area 30 feet south at the waterline. Dan felt it was a hidden entrance to the money pit. I find the stone triangle with the 7 degrees is a road sign of sorts to any ship that needed to set their compass to compensate for magnetic declination in order to end up at their designated location. Using a magnetic declination calculator the 7 degrees on the survey made by the stones is the compass setting in 1719 to allow the ship to return to Terceira Island in the Azores where the Portuguese fisherman were based. The area at the water identified by Dan was a dry dock for repairing ships. This is supported by the surface items found in this area (square washer and deck nails) as well as the wooden log structure under the road at the south shore. (Magnetic declination in the Azores was 6.97 degrees west in 1719) and will likely match the date of the logs by the road at the south shore. There are many other theories regarding the Stone_Triangle

Smith's Coveis an integral part to solving the mystery because the water that continues to flood searcher shafts and tunnels has been proven to come from Smith's cove. Note: most online mapping sources have Smith's cove and Shenan cove mis-labeled. 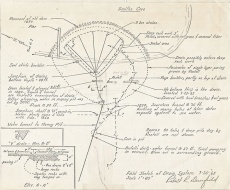 The Box Drains have been theorized to be the source of ocean water that thwarts all search efforts on the island. On multiple occasions, searchers have introduced dye into the pits only to find this dye makes it out to both Smith's cove and the south shore, implying that they must be collected in some fashion.